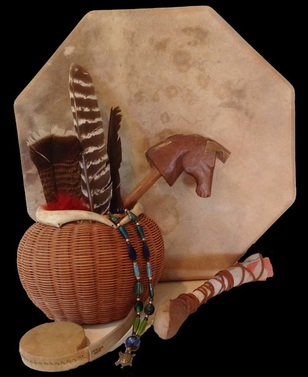 After a while, the people began to get up slowly. Dawn was coming, and the morning star shown bright in the eastern sky. They stood and sang a gentle song welcoming the new day. When the sun had risen, the people walked one by one into the center of the circle. They gathered up the drums, the flutes, the rattles and dusted them off. They smoothed out the feathers and polished the beads. Then the men took up their weapons. They restrung the bows and sharpened the arrows and spears. The women moved forward and picked up the pots, ladles, and knives and went down to wash them in the river. When they returned everyone picked up the blankets, shook them out and folded them.
Then they built a fire in the center of the circle and gathered around it. The Elder of the village came forward and looked around at all of the people. There was a twinkle in his eye as he said in a clear, calm voice what everyone was thinking--
"WHAT A STRANGE MAN THAT WAS."
All of the people nodded their heads in agreement.
Then everyone burst out laughing!
©2015 Bonnie Bishop all rights reserved