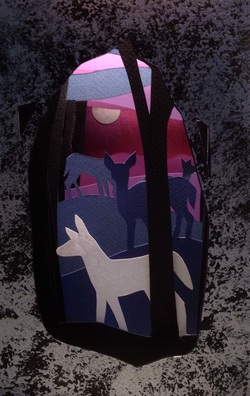 She was born in spring in the north country woods—white as the melting snow. The people who lived in the village gave her the name Spirit. That summer she often came up in conversation at the post office and the general store.
“Saw Spirit yesterday.”
“Yep, sure’s unusual—a white deer.”
“Hope she stays safe.”
“Hunting season comin’ up. Gonna post my land.”
“Yep, me too. Never did before, but don’t wanna see her shot.”
“No sir, seems like she otta be protected. So unusual
—a white deer.”

But the attempts of these good people proved to be in vain, for some have no regard for life—white deer or otherwise.
He came in the evening. His pickup truck moving slowly down the dirt road. The sun was setting, but he had another half-hour according to the law. He saw her then, just emerging from the woods with the other deer. He could not believe his eyes! Sure, she was small but pure white! What a conversation piece her head would make hanging above his fireplace for his buddies to admire.
BAM!
It only took one shot. She crumpled to the earth as the other deer fled in terror and confusion. He loaded her body into the back of his truck. She weighed only about 40 pounds. He could carry her himself, no need to even use the ATV.
He drove into the village where the deer were brought to be weighed and recorded. Expecting everyone to admire his trophy, he was surprised to receive only silent stares.
“Spirit,” said one of the older men in a sad, hushed voice as he turned and walked away.
But the man just thought, “Maybe those old codgers don’t appreciate what I’ve shot, but just wait till I get home!”
So Spirit’s beautiful, white head was stuffed, her glazed eyes replaced with glass, and her delicate limbs thrown carelessly into the trash. The man drove home and mounted the deer’s head over the fireplace in his den.
He called his buddies and invited them to come see his trophy. They pretended to admire it, but something about the small, white deer head with the glass eyes made them uncomfortable, and they soon made excuses to leave.
“What do they know?” the man sulked as he was left alone in his den with half a bottle of beer in his hand. He sat down in the Lazy Boy and stared at the deer who stared back at him—accusing. He finished his beer and went to get another, then another. He couldn’t look at the deer anymore. He was feeling odd—dizzy—he fell asleep.

He began to dream. He was a boy again. He was playing in the yard of their old house. Suddenly he felt something behind him—something big and scary. It yanked him by the collar, twisted his arm behind him, slapped his head, and threw him to the ground. It was his father. He lay there in great pain, but refused to cry. His father kicked him in the ribs, yelling unintelligible words, and stalked off.
The boy could not hold back the tears; he shuddered with the sobs but still made no sound. He lay on the ground trembling with fear and shame. He lost track of time. Then he felt a nudge. He jumped, afraid it was his father again. But no, he looked up. It was his dog, Snow, a pure white shepherd. She looked at him with her big, gentle eyes, and he reached out to hug her. He needed her comfort...
BAM!
Her body shot up, trembled, and crumpled to the ground. His father had shot her—shot his dog—his only friend!

The man woke up screaming. His eyes met the glassy eyes of Spirit. He put his face in his hands and sobbed. All these years he had buried the memory of his father, of Snow, but the dream brought it all back. And now the man realized he had done the same thing. He was horrified at this revelation—the connection between a dog and a deer. He had become all the things he hated in his father. He had killed something gentle, innocent, and white.
The man got up from his chair and took Spirit’s head down from the wall. He touched the soft fur. Then he reached for his gun and carried them both outside.
Beneath the spreading branches of a great pine, he dug a deep hole and placed the gun and the deer’s head in it. Her glassy eyes stared up at him—forgiving. Slowly he shoveled the earth back into the grave. He stood there for a long time and wept. He wept for the deer, for the dog, for the boy.

The next spring somewhere in the north country another white deer was born. The people of the village named her Spirit and hoped she would be safe.